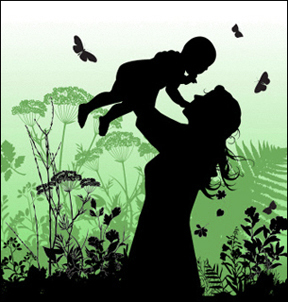 Once there was a young lass who lived alone with her wee babe. She loved her little one above all things and, when she had to go and harvest the fields to earn her bread, she would bring her little baby. The lass would place him in the shade of a fine oak tree and work nearby listening for his cooing and gurgling.

One day the lass heard a baby crying fitfully under the oak tree. She quickly ran to him, only to find that her child was no longer there. In the place of her sweet, apple-cheeked baby, there was a sickly, pale child who screamed and wailed as though starving for its very life. The lass ran all through the fields, asking everyone if they had seen her round little boy, but no one had and no one had seen what happened to him. Finally, the lass returned to the unhappy little one and, taking pity on him, she nursed him.

Weeks went by and still there was no sign of her own plump, sweet natured little boy. "Your little boy was taken by the fairy folk," the townspeople said in whispers, "You must get rid of the changeling they left in his place if you are ever to get your own dear one back." But the lass could not find it in her heart to rid herself of the poor, thin child that had been left behind.

Instead, she cared for him as if he were his own. It wasn’t long before the child began to grow into a fine picture of a child. Where he was once feather-haired and slight, he now had great tufts of golden locks and was round and sturdy as her little lad had been. But the lass never forgot her sweet baby and, after months had passed, decided the time had come to gain her son back. 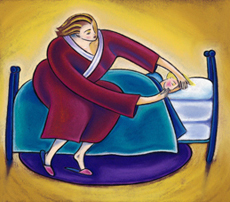 She took the child by the hand and went with him to the old wise woman on the edge of town. Her cottage was far away and it took most of a day to find it. When she did arrive, the lass was tired and sat by the old woman’s fire. "Tell me, how may I get my child back?" The lass asked the old woman.

"Well lass, if the truth be told, I don’t believe there’s much chance of that. You see, the fairy folk, they don’t have hearts. No hearts at all, so begging and pleading will have no effect on them."

"I won’t plead. All I want is a fair exchange." The lass said solemnly. "But I will get my baby back. That much I know. And I’ll do it with or without your help. I’d be grateful though, for any aid you’d give me." With that the old woman laughed out loud.

"Well, you are a spirited one, I’ll give you that. Do you know the dangers though, lass? Once you’re at the fairy hill, you’re under their power. They can keep you under their hill forever, or worse!"

The lass only thought of her little boy and said, "I know the dangers. I’m not afraid." The woman looked at her and said. "You rest here then. At May Eve they come out of their hill and ride about." She pointed over the moor to a hill in the distance. "They have been good enough neighbors to me. Just take care not to anger the queen and perhaps you will fare well yet." 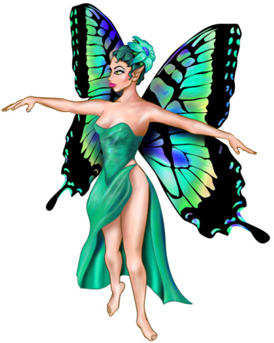 So the lass stayed with the old woman and on May Eve she set out to camp by the fairy hill. Night came on and the child slept beside the lass. All at once the lass was startled by the sound of starry bells and there before her rode a host of fairy folk, the queen on her great steed leading the band! The lass jumped up and called out, "Halt, fair queen!"

The queen’s horse reared high and the cold bright eyes of the queen fell upon the lass, she raised her hand as if to strike her and roared, "Who dares to bar the queen’s path?!"

"Yes, of the finest sort." With that, the lad awoke and cried out. The queen stopped and looked at him queerly, "And this, is this your gift to me?"

"Of a sort, my queen. I found this fine boy under a great oak tree at harvest. He was not the strapping lad you see now. But I took him home, fed him with what little I had, and cared for him well. Now he is strong and healthy. I did this as a favor to one of your own women."

The queen looked again at the boy, "This is my son. And, yes, he is handsome and healthy. I will take him." And she motioned for the folk to go to him.

"Wait!" said the lass, and the queen paused, "I ask for a fair exchange. In return, I want my own son back. You remember him, don’t you?" The queen nodded and glared at the lass. "Why should I do what you ask? Don’t you know that I could take both of you and keep you here forever? I could just take him if it pleases me." 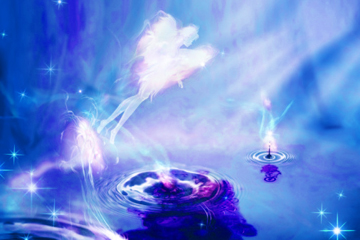 "Yes, I know this," answered the lass, "But I have heard that the fairy folk repay favors well. I have cared for your son when I did not have to. All I ask is a son for a son. That is fair."

"Hmmm," said the queen, "You are a brave one, aren’t you? I admire that. You may have your son." She gestured once again to those behind her who moved quickly away. They returned with the lass’s own little boy whom she grabbed quickly and held tightly to her.

"Go then," the queen said, as she lifted her own boy onto her horse, "You have done well by this boy of mine. Know this; your son carries with him the prosperity of the fairy folk. Peace and good fortune shall follow you both for the rest of your days."

With that, the queen spurred her horse around and the fairy folk were gone.

And so it was, the lass and her son lived happily with the blessings of the fairy folk upon them from that day forward.

Complete the activity shown below as you go through this lesson. At the end of the lesson, submit it to your teacher for a grade.